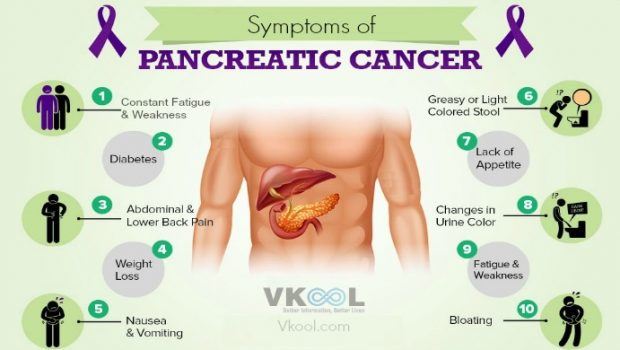 Pancreatic cancer is so difficult to treat in large part because it often isn’t discovered until the disease has spread to other parts of the body. That’s because in many cases there are no signs or symptoms until the cancer has reached an advanced stage. Even when there are early signs and symptoms, they are often vague, so patients tend to ignore them or doctors attribute them to another disease. For these reasons, pancreatic cancer is often known as a silent killer.

“There is not a single (symptom) that lets you home in specifically on pancreatic cancer,” says Dr. Brian Wolpin, director of the Lustgarten Foundation Pancreatic Cancer Research Laboratory at Dana-Farber Cancer Institute and an associate professor of medicine at Harvard Medical School. “They tend to occur later in the disease course, so for most people a small tumor will not be symptomatic. Symptoms develop later, when the tumor is larger or has spread.”

Even when symptoms do develop, “they are not a very good way to find the disease,” he says, because they may be confusing to patients and doctors. The symptoms also vary depending on where the tumor is located in the pancreas, which consists of a head, body and tail.

Knowledge of Pancreatic Cancer Is Key

With so few advanced warnings, how can people stay vigilant about the potential for pancreatic cancer?

“Knowledge of the disease is the key,” says Dr. Victoria Manax, chief medical officer of the Pancreatic Cancer Action Network. She recommends knowing the risk factors associated with the disease, including smoking, obesity and a history of chronic pancreatitis. “There are also hereditary factors that may come into play. If you have a relative or relatives that have been diagnosed with the disease, you may be at an increased risk,” Manax says. “Maintaining a healthy lifestyle and being aware of your own risk factors is important.”

You should always see a doctor if you have any signs or symptoms that worry you or are persistent, Manax says. The doctor can perform tests and procedures to help investigate what may be the cause. “If you have certain risk factors, you may also want to see a pancreatic specialist early on,” she says. “You are your own best advocate.”