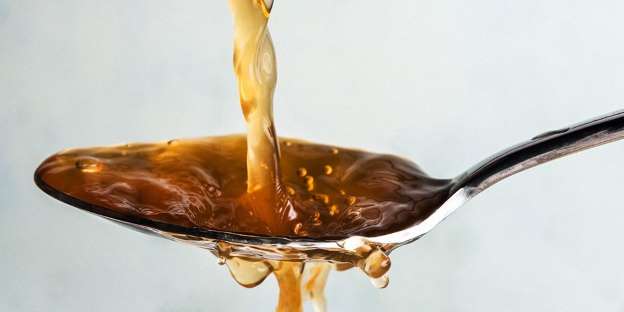 If chugging apple cider vinegar daily and magically dropping two sizes sounds like b.s., well, that’s because it is. Sure, if you’re using ACV to replace a calorie-bomb condiment like mayo, then it might help you lose ~some~ weight, says Leslie Bonci, R.D., the owner of Active Eating Advice.

1. Your immune system may actually get worse

There is evidence to suggest that probiotics and healthy gut bacteria translate to a strong immune system. ACV is a fermented liquid, and fermentation holds probiotic properties, so it could be an immunity booster…right? Probably not, says Bonci.

Fermented foods can help increase good bacteria in your gut, she says, and some—like sauerkraut—do come in a vinegar base. But the vinegar alone probably isn’t going to pack the probiotic punch that you need to make a difference in your immune system. And Bonci says that if you go nuts with the ACV, you could push out other nutrients from your diet, which is actually bad for your immune system. Womp womp.

2. You may feel extremely weak

At the risk of sounding painfully obvious here, if you try to subsist mainly on ACV drinks, you’re going to get too few calories to function. “It really creates that sense of imbalance, big time,” says Bonci.

If you want to start consuming more ACV, Bonci suggests instead having vinegar as part of a meal that also incorporates vegetables, protein, and carbohydrates, ideally as a replacement for a heavier dressing or seasoning. That way, your body will still get the fuel it needs – and you’ll save yourself a few unnecessary calories in the process.

3. You could lose weight—but only temporarily

That’s because any weight you’ve “lost” is primarily water weight, says Bonci. “So when you replace that water, your weight will come back on.

“If you do slim down on an ACV diet, it would be similar to any crash diet—so that rapid weight loss might end up slowing your metabolism and making it harder to shed pounds in the future, Bonci says.

Word on the street is that ACV is an appetite suppressant (FWIW, our writer who tried drinking it daily reported that she didn’t notice a change change in how hungry she was). In fact, Bonci says people who drink a lot of diluted ACV might actually end up hungrier because vinegar is so low-cal.

“You feel full for the moment that you’re having it, because you’ve just consumed a gallon of water, but when you pee that out, you’re going to be hungrier, sooner,” she says.

5. You could have serious stomach issues

“Because vinegar is acidic, some people don’t tolerate it all that well,” says Bonci. Not everyone will experience this, but if you have ulcerative colitis, inflammation in your digestive tract, or are just prone to stomach aches, you’ll probably want to steer clear.

The bottom line: Bonci says vinegar—any vinegar—is a great option for adding flavor to food without skewing its caloric value. But it’s not a magic potion—so don’t expect a major transformation.