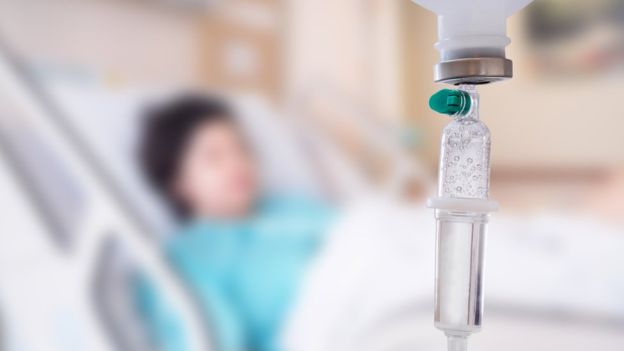 The life of a woman with terminal breast cancer has been saved by a pioneering new therapy, say US researchers. It involved pumping 90 billion cancer-killing immune cells into her body.

Judy Perkins had been given three months to live, but two years later there is no sign of cancer in her body.

The team at the US National Cancer Institute says the therapy is still experimental, but could transform the treatment of all cancer.

Judy – who lives in Florida – had spreading, advanced breast cancer that could not be treated with conventional therapy.

She had tennis ball-sized tumours in her liver and secondary cancers throughout her body.

“It took another week or two for it to completely go away.”

She remembers her first scan after the procedure when the medical staff “were all very excited and jumping around”.

It was then she was told that she was likely to be cured.

The technology is a “living drug” made from a patient’s own cells at one of the world’s leading centres of cancer research.

It remains experimental and still requires considerably more testing before it can be used more widely, but this is how it works: it starts by getting to know the enemy.

A patient’s tumour is genetically analysed to identify the rare changes that might make the cancer visible to the immune system.

Out of the 62 genetic abnormalities in this patient, only four were potential lines of attack.

Next researchers go hunting. A patient’s immune system will already be attacking the tumour, it’s just losing the fight between white blood cells and cancer.

The scientists screen the patient’s white blood cells and extract those capable of attacking the cancer.

These are then grown in huge quantities in the laboratory.

Around 90 billion were injected back into the 49-year-old patient, alongside drugs to take the brakes off the immune system.

Dr Rosenberg told me: “The very mutations that cause cancer turn out to be its Achilles heel.”

These are the results from a single patient and much larger trials will be needed to confirm the findings.

The challenge so far in cancer immunotherapy is it tends to work spectacularly for some patients, but the majority do not benefit.

Dr Rosenberg added: “This is highly experimental and we’re just learning how to do this, but potentially it is applicable to any cancer.

“At lot of works needs to be done, but the potential exists for a paradigm shift in cancer therapy – a unique drug for every cancer patient – it is very different to any other kind of treatment.”

“It’s the first opportunity to see this sort of immunotherapy in the most common sort of breast cancer at the moment it has only been tested in one patient,

“There’s a huge amount of work that needs to be done, but potentially it could open up a whole new area of therapy for a large number of people.”