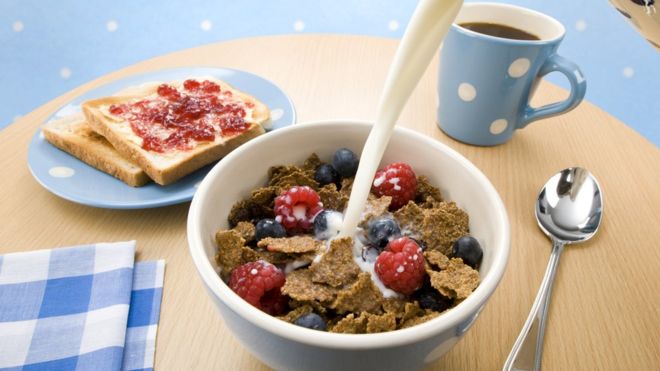 Breakfast may be the most important meal of the day, but eating it won’t help you lose weight, research suggests.

Those who ate breakfast consumed 260 more calories per day and gained 1lb more than those who skipped it, a review of previous studies found.

But experts say a healthy breakfast can be a good source of calcium and fibre.

It has also been shown to improve concentration and attention levels, particularly in children.

Breakfast gives you energy, stops you snacking later in the day and supplies essential nutrients – so we are told.

But this new Australian research in the BMJ, which reviewed the results of 13 separate trials on breakfast eating, weight change and energy intake, found little evidence for those views.

The findings of the Monash University research team suggest that skipping breakfast might in fact be a good way to reduce total daily calorie intake.

They found that breakfast eaters consumed more calories overall and breakfast skippers did not have a greater appetite in the afternoon.

And they say caution is needed when recommending breakfast for weight loss in adults – because it could have the opposite effect.

However, the researchers added that there were limitations to their study.

Prof Kevin Whelan, dietetics expert and head of King’s College London’s nutritional sciences department, says we should not get too hung up on calorie intake first thing in the morning.

“This study does not say breakfast is bad for the health,” he said.

“Breakfast is important for nutrient intake, such as cereals and milk which are good for calcium and fibre.”

But the BMJ research did not look at this aspect of breakfast.

“We are not talking about breakfast being the cause of obesity,” he said.