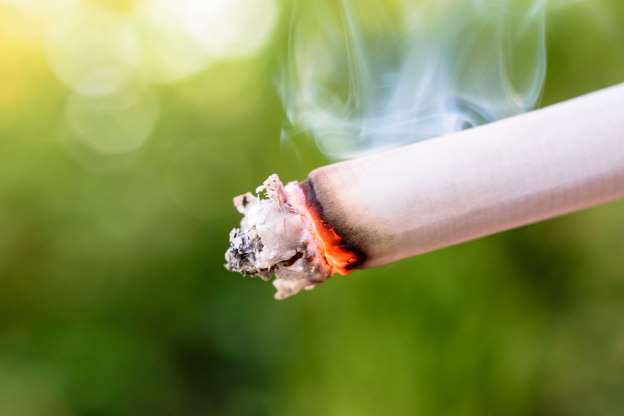 The study sheds light on the little-understood chemicals left behind years after a cigarette has been put out.

Cigarette smoke chemicals can contaminate indoor spaces where no one has lit up in decades by traveling through the air, according to a new study that sheds light on how pervasive these harmful substances might be.

Third-hand smoke—the residual chemicals left by cigarette smoke—can linger on clothing and indoor surfaces such as furnishings and enter a building’s ventilation system, researchers at Drexel University found. Previous studies have shown it can even get into neonatal intensive care incubators.

Dr. Michael Waring, co-author of the study and associate professor at Drexel’s College of Engineering, said in a statement: “While many public areas have restrictions on smoking, including distance from doorways, non-smoking buildings and even full smoking bans on campus for some universities, these smoking limitations often only serve to protect non-smoking populations from exposure to second-hand smoke.”

“This study shows that third-hand smoke, which we are realizing can be harmful to health as second-hand smoke, is much more difficult to avoid.”

More research is now needed to understand the public health implications of these findings, as well as whether the chemicals present in e-cigarettes have a similar effect.

“Previous studies have shown children are exposed to third-hand smoke, more so than adults, in surprising places, for example in neonatal intensive care incubators which have clearly come from third-hand smoke,” he said.

“A previous U.K. study assessing the exposure of third-hand smoke in smokers’ houses suggested there would be an increased risk of cancer, possibly 1 per 1000 exposed. It is likely the risks will be higher in these settings, for example smokers’ houses and cars. Another potential risk is in parents who smoke and then hold their babies. The size of the baby means it will be close to their clothing that will be emitting these toxic chemicals.”