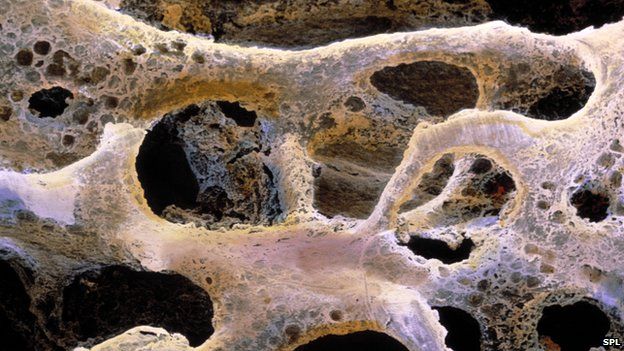 Cheap drugs normally used to strengthen bone can cut deaths from breast cancer, research shows.A charity said it was one of the most important findings in breast cancer treatment for a decade and could save 1,000 lives a year in the UK.

The data from 18,766 women, published in the Lancet, showed the drugs prevented secondary tumours growing in the bone.

The drugs are not currently available for this purpose on the NHS.

By the time a tumour is removed from the breast there is always a risk that tiny fragments have already spread.

Bone is the favourite second home of breast cancer where it can lie dormant for years.

Bisphosphonates are mainly used to prevent bone loss in osteoporosis.

It is thought they can effectively starve any cancerous cells that do spread to the bone to stop them growing.

Some women take them after a cancer has been detected in their bones.

But the Early Breast Cancer Trialists’ Collaborative Group, co-ordinated by the University of Oxford, analysed the impact of intervening earlier.

It analysed data from 26 separate trials of women who were given the drug for up to five years after a cancer was removed from their breast.

The results showed a 28% reduction in cancers emerging in the bone, but only in post-menopausal women.

Deaths were cut by 18% over the 10 years after they were first diagnosed.

Prof Rob Coleman, who analysed the data at the University of Sheffield, told

The Health Magazine website: “The magnitude of the benefit on mortality was bigger than we had anticipated – a risk reduction of 18% is quite sizeable.”

However, the drug is not licensed for use unless a cancer has been discovered in the bone.

And as the drug is out of patent there is little financial incentive for a pharmaceutical company to change the licence.

Prof Coleman added: “The access issue is an important one. It would be a great shame if the systems we have to work with prove to be a block.

“Normally the problem is we can’t afford [a new drug] but this is peanuts, it’s that there isn’t a mechanism for this and there needs to be.”

Lady Morgan, chief executive of Breast Cancer Now, said: “We believe that this is one of the most important steps forward in breast cancer treatment since the introduction of Herceptin over 10 years ago, but this time we’re talking about a few pence rather than thousands of pounds, and millions saved by the NHS.

“However, despite costing less than five pence a day per patient, this treatment runs the risk of ‘sitting on the shelf’, and not realising its full benefit for the 34,000 [post-menopausal] women who could be eligible to take it each year.”

An NHS cancer task force led by the head of Cancer Research UK this week called for new guidelines to be produced on bisphosphonates.